How to Prune Boxwoods to Minimize the Threat of Boxwood Blight

Boxwood blight, or boxwood leaf drop, is a relatively new fungal plant disease that was first identified in the UK in the 1990’s. Since then it has spread to many areas of the world, and has become a disease of great concern in the U.S.

Boxwood blight is extremely contagious and affects every species of boxwood. The disease first presents itself as brown spotting on the leaves. Affected plants then form distinctive black or dark brown lesions on the stems, accompanied by leaf drop and severe dieback. Boxwood blight is often fatal, especially to young plants.

Any property manager with a significant population of boxwood must decide what steps to take to fend off boxwood blight. A strict fungicide program is a common solution, but not the only one. Boxwood pruning methods must also be part of the decision. 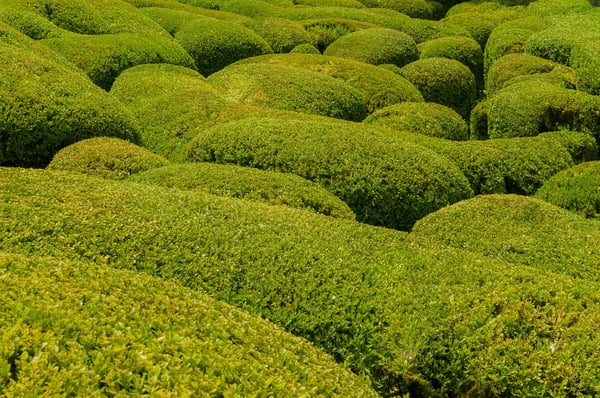 A fungus must have moisture. The higher the humidity and the more moisture in and around a boxwood planting, the more the fungal population thrives.

Typically, boxwood shrubs are given the ‘meatball’ cut. That means they are sheared into a ball shape. This shearing causes radical branching at the tips, and this ‘skin’ of tight branches in turn creates a moisture trap—basically, an open invitation for boxwood blight to come in and feast.

How To Prune To Minimize Blight

The alternative ‘open pruning’ method significantly reduces the moisture trap and encourages resistance not just to blight, but to all boxwood fungus.

The act of selective pruning deep within the plants means branching is looser, and the ‘surface’ of the plant is more porous. This porosity is what makes the method the healthiest choice. Air will circulate throughout the plant, reducing leaf die-off and moisture collection.

As we have introduced the idea of alternative pruning for boxwoods, we have encountered a wide spectrum of reception. Some customers prefer to take their chances and maintain the traditional look. However, many others love the more natural look, which fits in well with the modern trend towards a more nature-inspired aesthetic.

Winning The Battle Of The Blight

In addition to pruning for blight resistance, we use and recommend the following tactics:

The battle against boxwood blight will be fought on many fronts. Many landscape designers are only using boxwood by request now, which has created a huge change in the default plant palette in urban areas. However, for those who can’t stand the thought of giving up on this beautiful, versatile, and highly traditional landscaping shrub, there are ways to minimize chances of infestation—and property managers are smart to begin at pruning.